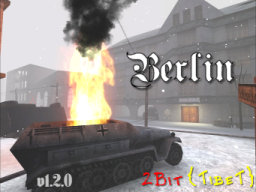 ~ Download ~
A Berlin street, 1945. Allies have to capture the street in house-to-house combat. The first buildings to capture are marked by a red flare (which turns blue when Allies capture the flag and red on Axis recapture).

Flags (which are always on the ground floor) must be held by the Allies for a total of 90 seconds to make the capture permanent.

When the first buildings are secured the yellow flares are extinguished and red flares are lit outside the next buildings to be captured. In this way Allies progress up the street, trying to secure a total of 7 buildings to win.

There are no dummy windows in the map, which means every window opening potentially conceals an enemy soldier: so advancing in the open street is a risky business. Allied cov ops will need to provide smoke cover and seek out enemy snipers to assist the advance of Allied troops.

The flares are an important element in the game, and are produced using ET smoke generator entities. Some players will have disabled smoke, perhaps to help performance on low-spec machines or maybe to gain a small visual advantage, and so will not be able to see the flares.

To see flare smoke you need to set cg_wolfparticles to 1 (on NQ you need cg_smokeparticles set to 1).