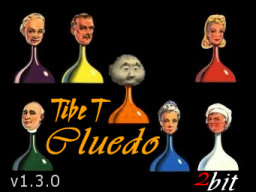 ~ Download ~
Set in the country manor of the board game Cluedo (Clue in the U.S.), there is no real scenario - this is played just for laughs as a break between "proper" maps. Each game lasts about 10 minutes. Axis spawn in the Ballroom (centre top of the map) and Allies in the Hall (centre bottom).

A flag then randomly spawns in one of the seven other rooms. The upper edge of the room's walls glow white when the flag is active inside.

The flag can be captured by either team, giving the white glow an inner blue (allies) or red (axis) core to show the current possessor. When the flag is held for a total of 90 seconds by a team it is secured and removed from the map. The white glow is removed and the inner core remains to show that the room has been fought over and which team secured it.

This process is repeated until one team has secured four flags and is victorious.

Players can move freely between the rooms and enter the cellar. The doors are glass lined so that players are aware of anyone camping the other side, which is legitimate and likely to be the case.

Each room can be entered or exited through its windows, and the four corner rooms have secret passages which link them. Players can also move around and over the building.

Each of the seven flag rooms has a trap which is activated by the lever in the corridor outside the room. Once a trap is activated it cannot be re-used for 30 seconds.

The traps make the interior of the room uncomfortable or downright dangerous for its occupants, which helps to shift players camping the flag. The player activating a trap is teleported to a location outside the room, so he can witness the carnage he has caused.

To make things even more lively, the players will find there are all sorts of places that engineers can plant mines to surprise the unwary...

The action is fast and frantic, with low respawn times to ensure all the players stay in the thick of it.

Recommended for teams of between 2 and 12 per team. Enemy Territory Stuff
| 2bit