25.10.2007 : 20:11
Corrects the mistake which made the carried obj icon visible through walls. I quite liked the effect but it confused and annoyed some players. 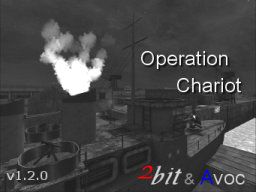 ~ Download ~
In 1942 the greatest threat to allied shipping was the mighty German battleship, Tirpitz. Her vast size meant that the only dock on the Atlantic seaboard that could accommodate her was at St. Nazaire.

So Operation Chariot was born, it's mission to blow up the dock and neutralize the threat of the Tirpitz.

The game commences with the allies having rammed the south gate with the destroyer HMS Campbeltown. They must now attempt to destroy as many of the 6 main dockyard facilities as possible.

There are 6 objectives to destroy, with victory being achieved to differing degrees at game end:

The map is very open and the allies can attack the objectives in any order - however, for the sake of gameplay, they don't have it all their own way.

This allows the allies to choose their targets, but limits them to attacking up to two at a time.

This is like having a choice of 2 spawn points, but without the bother of selecting them on the command map.

To guide axis players to the objectives under threat, there are ingame command maps in each Barracks. Indicators on these maps show which objectives are under attack, and which ones are especially in danger because demolition charges have been placed.

By checking this map on spawning, axis players can take themselves immediately to the action.Enemy Territory Stuff
| 2bit