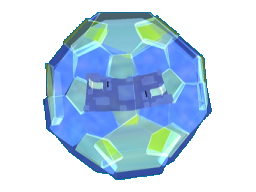 ~ Download ~
Mankind developed powerful weapons and shields. Intelligent scientists convinced some soldiers to destroy their own weapons being too strong. The enemy's scientists ordered a similar mission. As there is only one point to destroy the shield-protector, both, axis and allies arrived at the same time in the same small, but modern, city. Both teams immediately began to fight.
What a pity they didn't know their missions were the same. Unnecessarily warring they just had in mind to destroy both, axis and allied, shield-protector placed in the city before as an act of deception - "to defend" - , because the teams' bosses did not know anything about a destruction-plan.

The shield rotates around you and follows your movement as good as possible if it is active.
It also can't be stolen, "hold"/"got" by the other team before you get killed or shield gets deactivated, "unhold"/"hidden" by your team.

At map start your own shield (as is shouldn't be used for fighting) is secured in a building, nobody can enter. So it is rescued - in your hands. Don't let the opponents dynamite the building's wall in order to steal it!

Also if it is not active but still solid as you have hidden it you can also activate it from outside to prevent hiding it into a wall.SplashDamage
| Servers running this Map