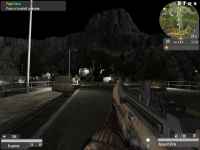 If anyone wants to give it a try, I've uploaded the config files I made for making Valley a dark, night time map. WARNING: Lots of lights will be spawned with lights1.cfg, may effect performance, especially inside large buildings near Main Outpost.

Has to be done on a local computer, can't get it to work on a server. Just select "Play Computer", start the game, open the console, and type "exec lights1.cfg"

NOTE: It will also spawn 3 extra base defense guns, a radar inside the building behind the Titan at the first GDF spawnpoint, and a psi radar above the tunnel entrance, just for giggles. That's because it real hard to see the Tormentor when it comes in on a dark map.

I've also included the files to light the separate areas of the maps, if the lights1.cfg is too intense for your computer to handle.

A readme is enclosed explaining which cfg lights which area. You exec them the same way as described above, but substitute the individual area cfg filenames (lightsa.cfg, lightsb.cfg, etc). You can light up the map one area at a time this way. Lightsa.cfg has the extra defense guns and radar spawns in it.

Enjoy. Not responsible if you get lost in the dark, though!